Performance Enhancement and Injury Prevention: Are You Screening Your Athletes 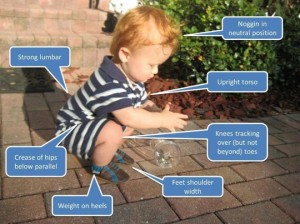 Very few of us think back to when we were fresh out of the womb learning to move for the first time. We enter this world as infants with unrestricted mobility. This is the reason why most infants are able to put their foot in their mouth or even touch their head with their feet. As infants grow, they learn to stabilize this hyper-mobility so they may progress to the stages of development – rolling, crawling, walking, etc. The evolution of movement throughout development, however, is something most of us fail to truly appreciate. Throughout life, most humans have lost the movement patterning created during this development process. This is quite easy to see. Observe a three year old playing and most likely he/she is in a squatted position reaching down to their toys. Take the same child at the age of eight and observe how he/she squats and it’s a whole different image. I have witnessed this firsthand in my coaching of youth athletes. It is something that needs to be addressed as we age, from infants all the way to elderly individuals.

This weekend, I had the opportunity to get my Functional Movement Systems (FMS) certification. While I have screened athletes at DSP in the past, my purpose for taking the course was not only to actually be able to say I’m certified, but to expand my knowledge of movement and corrective exercises to improve movement dysfunctions in my athletes. The Functional Movement Screen developed by Gray Cook (if you don’t know who he is, you may be living under a rock), grades seven different movement patterns to assess mobility, stability, balance, symmetry, and proper movement sequence. It essentially sets a baseline for evaluating movement patterns and helps to identify asymmetries and dysfunctions needing to be addressed. The course takes you through Level 1 – where you learn the seven movement patterns and are able to properly screen them; and Level II – where you learn how to program corrective exercises to help fix dysfunctions and asymmetries identified during the screen. 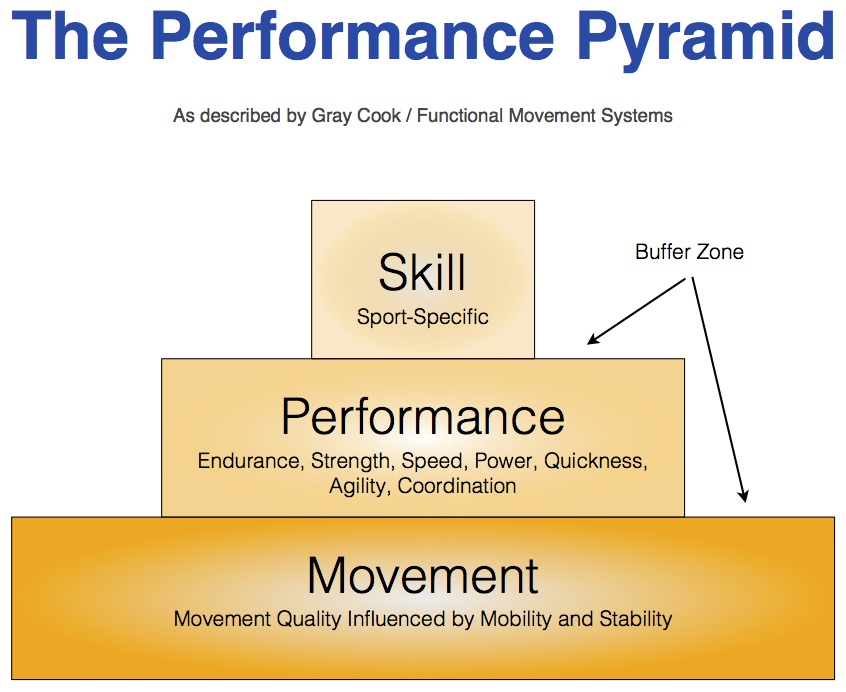 One of the most simplistic ways of looking at how we function is the Performance Pyramid presented to us at the FMS course. This pyramid is constructed of three rectangles diminishing in size from bottom to top. The base of the pyramid is Movement; followed by Performance; and Skill at the top. The base of the pyramid is the foundation that defines how well the athlete’s body functions in terms of mobility, stability, balance, symmetry, and proper movement patterns. This base is the widest part of the pyramid, upon which performance and skill are built. The second level, Performance, represents measurable power and athleticism, such as a standing broad jump. Skill tops the pyramid and is exactly what its name implies – sport specific skill. Not addressing fundamental movement issues and continuing to build performance and skill on top of dysfunctional or asymmetrical movement patterns has been shown to increase the risk of injury in athletes 3.5 times. Any one of our performance coaches at DSP can tell you that this is a known fact. We have athletes that come in and want to train with us to “get fast”. We screen them and note asymmetries and dysfunctions in their FMS scores. Many will train with us and allow us to address and fix the asymmetries and dysfunctions; some will not. Those that continue to train competitively at their sport without addressing the underlying movement issue will in almost every case get injured. Why – because they chose to continue to train the performance and skill levels of the pyramid without addressing pre-existing functional weakness.

So what are the seven movement screens and how do they help identify movement pattern dysfunctions:

Demonstrates fully coordinated ankle, hip, and thoracic spine (think upper and middle part of your back) mobility and core stability with the hips and shoulders functioning in symmetrical positions.

Challenges the body’s proper stepping and stride mechanics as well as stability and control in single leg stance. This test is also used to assess trunk stability, mobility of the hips, knees, and ankles as well as gluteal strength and balance ability of the lower extremities.

Assesses left and right function in a basic pattern and is intended to place the body in a position that will focus on the stresses as simulated during rotation, deceleration and lateral type movements.

Identifies active mobility of the flexed hip and initial and continuous core stability while the opposite hip remains extended and flat on the ground. Demonstrates the ability to disassociate the lower extremities while maintaining stability in the pelvis and core.

Basic observation of reflex core stabilization, not strength. The goal is to initiate movement with the upper extremity without allowing movement of the hips or pelvis. That is, no sagging or rotation of the pelvis in relationship to the torso while pushing up.

After scoring the results, it’s important to note that you do not fix all dysfunctions observed. Instead, you fix the “weak links” first, which often times addresses other dysfunctions. Unless the individual scores a zero – indicating pain at any point during the screen, most of the asymmetries and dysfunctions noted can be corrected by simple mobility exercises. Often times, marked improvements in scores can be seen after a few days of adding mobility exercises to the athlete’s program. Addressing issues noted during the screen may not only allow the athlete to perform at his/her optimal level, but also potentially prevent serious injury costing them their athletic career.

P.S.~ Just a reminder that the Early Bird registration for our Winter Athletic Performance Program ends this Saturday. Our Velocity Based strength and conditioning program ensures that our athletes are always peaking and game ready. Don’t miss out on the opportunity to DOMINATE this Spring. Spots are filling fast. Sign up now and receive 15% off your registration!