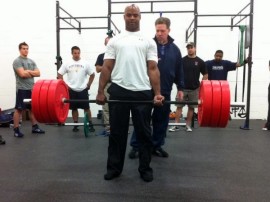 Marty Gallagher is indisputably one of the world’s premier progressive resistance coaches. He set his first national records as a teenage lifter in 1967. He set his most recent national records in 2015. Mentored by the first world superheavyweight powerlifting champion, Hugh “Huge” Cassidy, Gallagher in turn mentored multi-time world champion Kirk Karwoski, the greatest 275 pound lifter in the history of powerlifting. Gallagher coached Black’s Gym to five powerlifting national team titles and was assistant head coach for the United States when team USA won the world team title in 1992.

Gallagher will share with seminar attendees the signature deadlift techniques first devised by Cassidy in the 1960s and then used by a succession of Maryland world powerlifting champions: Mark Dimiduk (783 deadlift, 220 class,) Mark Chaillet (880 dead, 275 class,) George Hecter (840, 242 class,) Marty Gallagher (744, 242 class,) and Kirk Karwoski (825, 275 class.) Our signature deadlift techniques have been honed and refined in the interceding 50 years and are optimal for deadlifting maximally yet deadlifting safely.

Workshop: this is a deadlift workshop wherein archetypal techniques will be demonstrated and practiced. Attendees will work with a squad of coaches. The goal is to grock and then ingrain the signature deadlift techniques used by world champions and world record holders.

Two sessions: we will work in two four hour sessions. Morning will be dedicated to deadlift techniques. The five sequential deadlift variations will be demoed and drilled. The afternoon session, also four hours, is dedicated to the tactical application of the deadlift techniques learned. All of the hall-of-fame Maryland lifters used straight line periodization. This most basic of periodized strategies has fallen out of favor. To this day the records set using this ultra-basic approach have yet to be equaled or exceeded. We explain periodization and recap what we’ve learned.

Appropriate for all levels: both elite lifter and deadlift novice can attend and benefit: the techniques and tactics for the elite and the beginner are identical – the only difference is the payloads.